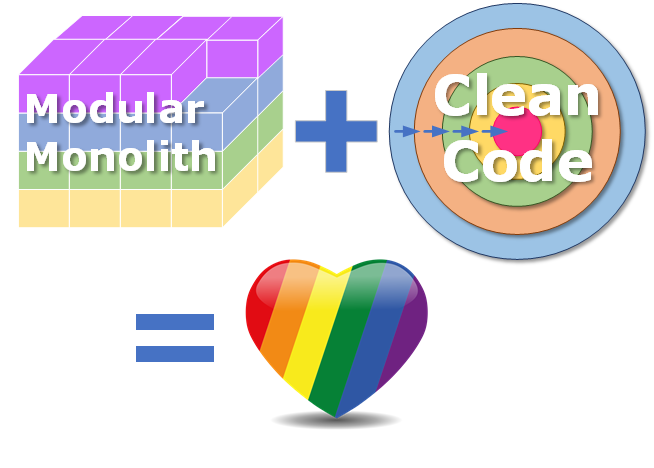 Like the first article I’m going to give you my impression of the good and bad parts of the Clean Code architecture, plus a look at whether the time pressure of the project (which was about 5 weeks later) made me “break” any rules.

A summary of the Clean Code architecture

The combination of rules 3 and 4 could cause lots of issues as lower layers will need to access external services. This is handled by adding interfaces to the inner-most layer of the onion and registering the external services using dependency injection (DI).

The figure below shows how I applied the Clean Code to my application, with is an e-commerce web site selling book, called the Book App.

NOTE: I detail the modification that I make to Clean Code approach around the persistence (database) layer later in the article.

Setting the scene – the application and the time pressure

In 2020 I was updating my book “Entity Framework Core in Action” I build an ASP.NET Core application that sells books called Book App. In the early chapters is very simple, as I am describing the basics of EF Core, but in the last section I build a much more complex Book App that I progressively performance tuned, starting with 700 books, then 100,000 books and finally ½ million books. For the Book App to perform well it through three significant enhancement stages.  Here is example of Book App features and display with four different ways to display the books to compare their performance.

At the same time, I was falling behind on getting the book finished. I had planned to finish all the chapters by the end of November 2020 when EF Core 5 was due out. But I only started the enhanced Book App in August 2020 so with 6 chapters to write I was NOT going to finish the book in November. So, the push was on to get things done! (In the end I finished writing the book just before Christmas 2020).

My experience of using Clean Code with a Modular Monolith

A. What was good about Clean Code?

To explain how Clean Code helps we need to talk about the main architecture – the modular monolith goals. The modular monolith focuses on features (Kamil Grzybek called them modules). One way to work would have one project per feature, but that has some problems.

The Separation of Concerns (SoC) principal says breaking up a feature parts that focus on one part of the feature is a better way to go. So, the combination of modular monolith and using layers provides a better solution. The figure below shows two modular monolith features running vertically, and the five Clean Code layers running horizontally. The figure has a lot in it, but it’s there to show:

The importance of the Service Layer in the Clean Code layers

For me a Service Layer is a very important level.

Thus, the infrastructure layer, which is just below the Service Layer, contains for services that are still working in the entity class view. In the Book App these projects contained code to seed the database, handle logging and providing event handling. While services in the Service Layer worked with both lower / inner layer data structures and front-end data structures.

The main problem was fitting the EF Core DbContext into the Clean Code architecture. Clean Code says that the database should be on the outer ring, with interfaces for the access. The problem is there is no simple interface that you can use for the application’s DbContext. Even if you using a repository pattern (which I don’t, and here is why) then you have a problem that the application’s DbContext has to be define deep in the onion.

My solution was to put the EF Core right after to the inner circle (name Domain) holding the entity classes – I called that layer persistence, as that’s what DDD calls it. That breaks one of the key rules of the Clean Code, but other than that it works fine. But other external services, such as an external email service, I would follow the Clean Code rules and add an interface in the inner (Domain) circle and register the service using DI.

Clean Code – how did it fair under time pressure?

Appling the Clean Code and Modular Monolith architectures together took a little more time to think thought (I covered this in this section of the first article), but the end result was very good (I explain that in this section of the first article). The Clean Code layers broke a modular monolith feature into different parts, thus making the feature easier to understand and removing duplicate code.

The one small part of the clean architecture approach I didn’t like, but I stuck to, is that the Domain layer shouldn’t have any significant external packages, for instance a NuGet library, added to it. Overall, I applaud this rule as it keeps the Domain entities clean, but it did mean I had to do more work when configuring the EF Core code, e.g. I couldn’t use EF Core’s [Owned] attribute on entity classes. In a larger application I might break that rule.

So, I didn’t break any Clean Code rules because of the time pressure. The only rules I changed were make it work with EF Core, but I might break the “Domain layer and no significant external packages” in the future.

My question is: does the Clean Code architecture provide good improvements over a traditional layered architecture, especially as I had to break one of its key rules to work with EF Core? My answer is that using the Clean Code approach has made me a bit more aware of how I organise my layers, for instance I now have an infrastructure layer that I didn’t have before, and I appreciate that.

Please feel free to comment on what I have written about. I’m sure there are lots of people who have more experience with the Clean Code architecture than me, so you can give your experience too.

0 0 vote
Article Rating
Subscribe
Login
0 Comments
Inline Feedbacks
View all comments
wpDiscuz
We use cookies to ensure that we give you the best experience on our website and monitoring traffic. If you continue to use this site we will assume that you are happy with it.Ok