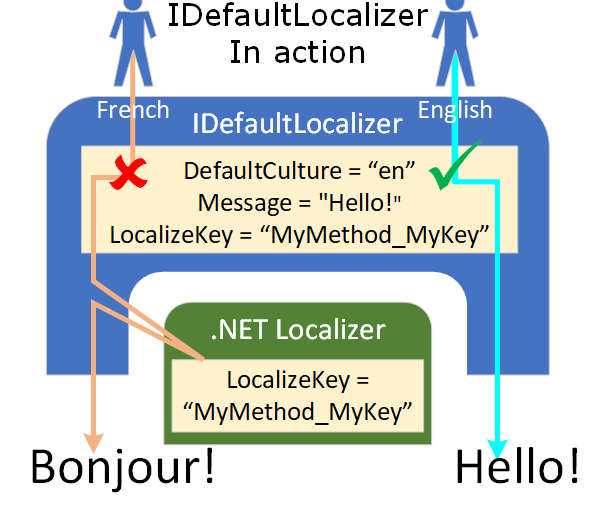 One of users of my AuthPermissions.AspNetCore library (shortened to AuthP in this article) asked for support for multiple languages – known in .NET as Localization. I looked at the .NET localization solution and it lacked some features I needed for my situation. I took some time to work out to use the .NET localization code and in the end, I built a small library called Net.LocalizeMessagesAndErrors which wraps the .NET version with a interface that adds a some extra features.

This article explains how this new library it easier to add / manage multiple languages in your applications, with articles showing how to use this new localization library. The full list of the articles in this series are:

A brief view of how .NET localization works

At first, I was confused by how to support multiple languages because I has no idea what the terms means and how they work together. Therefore, here is a short introduction from me with links at the end to other articles that I found very useful:

Super-quick explanation on the IDefaultLocalizer works

This article is about why I implemented the Net.LocalizeMessagesAndErrors library and what new features that it contains, but here is an overview of the IDefaultLocalizer service to help you understand the extra features this service provides.

The list below gives the localize challenges I found and how I overcame them. The list is in order with the biggest challenges first. They are:

1. I didn’t want to turn all the messages / errors into just a localize key

As of version 4.0.0 of the AuthP library has 100+ messages over five projects. Most of these messages are error messages while the rest are success messages. Here are an example of success and error message:

If I used .NET localization these messages would be turned into a localize key, which from my view has the following downsides:

My solution was to leave the current success / error messages where they are and define them as generic English (culture “en”) – I call these messages as default messages. I already have a common pattern for my methods / services which handles success and error message, so it was easy to update the code to pass the default messages to my localization wrapper called DefaultLocalizer. The process the DefaultLocalizer follows are:

Here is an example of my improved common method to handle localization showing a success message and an error message.

NOTE: If any errors are added to the status, then the Message is changed to “Failed with {n} errors”. That’s just in case the success Message is incorrectly shown.

2. I wanted a NuGet that works without having to setup the .NET localization

The solution I added is into the DefaultLocalizer service is to return the default message if the .NET localization hasn’t been setup. This means when the localization version of the AuthP library is released:

I hate to think what new and existing users would think if they had to set up .NET localization to use the AuthP library!

NOTE: You might not be creating a NuGet like I has, but if you are adding localization to an existing application, then this approach allows you to add localization in stages. That might be pretty useful.

The .NET localization will return the localize key if no entry is found in the resource files. This typically doesn’t provide a good experience for the user. The DefaultLocalizer service can provide the default message which isn’t in the correct language, but easy for the user to translate.

The other issue of missing resource files / entries is reporting. The NET localization does provide a ResourceNotFound parameter, which will be true if the localized message isn’t found, but if you want a log / event then you need to add that to each localization call. On the other hand, the DefaultLocalizer service provides a very detailed log – a example is shown below.

This provides everything you need to correct this problem, including the class, method, and line number of where the localization came from.

4. I wanted a better format for the localise key to help creating unique strings

The .NET localization service allows you to use any string as the localize key, and its up to you to make sure it is unique. You can use string constants, e.g. “HelloMessage” for the localise key, but when I build (and used!) the DefaultLocalizer service I found string constants were hard work and error prone.

My view is that string constants are fine for small applications, but for larger applications the localize key needs a standard format and methods to help the developer to create unique localize keys quickly. My solution has a format of “{className}_{methodName}_{localKey}”, with the className and methodName being optional. The table below shows are three main versions that are used, with the first one used on 90% cases.

To implement this localize key format I have created a set of extension methods that can automatically fills in the “{className}” and “{methodName}” for you. This has two advantages:

Here are two examples taken from the ExamplesOfStatusGenericsLoc method shown earlier in this article:

You can get a full set of the extension methods in the “Creating localize keys” document also cover some of the problems and solutions of the balance between readable localize key and being unique in this section.

5. I wanted to unit test without setting up localization.

As I said the AuthP library has five project containing code and I have nearly 400 unit tests, of which a third check errors or success messages. If I used .NET’s localization on its own, then I could easily stub out (see this Microsoft document about stubbing) the .NET’s localize methods but would still have to change many of the unit tests to use the localize key instead of the actual error / success messages. It’s more work and makes the unit tests less easy to understand as the actual error / success strings are gone.

This works fine, but I found another type of stub that solved another issue I came across, as described in the next section.

6. I wanted to check the localized messages with their localize key

Once I starting to localize my AuthP library, which has ~110 localization I soon found I really needed an overview of all the localizations to check on localise key uniqueness, format, duplicates etc. Stepping though the code to fine each message is hard work and its easy to miss one.

So, I thought – can I write the localize information to a database when running my unit tests. At that point I created StubDefaultLocalizerWithLogging class, which returns the default message, but (optionally) logs the full information of the localization data to a database. This provides a quick way to look at the localized messages, and it can find certain problems.

For each use of a DefaultLocalizer usage it logs the localize key, culture, the message and where the localised entry was created (the full list of what is in the log can be found in the LocalizedLog class, which has 9 parameters).

The screenshot below is a section of the logged localization data. Note the PossibleErrors column which has found an existing entry in the database with the same localize key, but the message format is different. NOTE Click the screenshot to get a bigger version.

I have found quite a few of localization issues by looking through the sorted data. I also I found the logged list very useful when building resource files for other languages because it gives me the Name (localize key) and the Value (string / format) that needs translating. My unit tests only find 75 localized messages when in fact that there are ~110 localized messages. For the 35 localize message ones that aren’t logged I had to go three extra steps to set up the entry in the resource file(s):

These three manual steps are tedious and error prone. It enough to make me improve my unit test coverage 😊.

Thankfully you can turn the database logging on or off by setting the `SaveLocalizesToDb` to true or false respectively – see the documentation for the StubDefaultLocalizerWithLogging here.

7. Tip: Use Excel (or other app) to setup the data for the resource files.

This isn’t anything to do using DefaultLocalizer, but I found that adding entries to a resource files isn’t a nice process in Visual Studio (VS Code, with the ResX Editor extension, is better). In the end used Excel to entry the resource Name / Value and then turn in into a .csv file. The code below (taken from my AuthP repo) converts CVS to a resource file.

I find this is especially useful if you need to change / add to your resource file, as its much easier to search / change in Excel.

The Net.LocalizeMessagesAndErrors is relatively small (the DefaultLocalizer is only has ~100 lines of code), but it took me more than five weeks of work! That’s because when I started to use the library I found a load of improvement – I got to local version 1.0.0-preview034 before I had finished. The result is that the library is much easier to use when updating an existing application to support multiple languages, and hopefully nicer to work with.

In the following articles I will show how to use the Net.LocalizeMessagesAndErrors library to build localized .NET applications. There also good documentation for this library now that contains all the details if you want to try it out now.

5 1 vote
Article Rating
Subscribe
Login
0 Comments
Inline Feedbacks
View all comments
wpDiscuz
We use cookies to ensure that we give you the best experience on our website and monitoring traffic. If you continue to use this site we will assume that you are happy with it.Ok