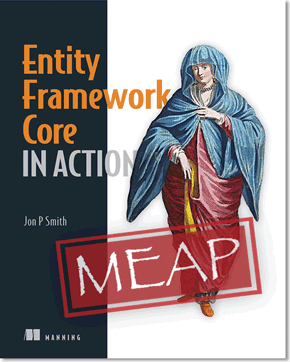 I was building an application using Entity Framework Core (EF Core) for a client and I needed to set up test data to mimic their production system. Their production system was quite complex with some data that was hard to generate, so writing code to set up the database was out of the question. I tried using JSON files to save data and restore data to a database and after a few tries I saw a pattern and decided to build a library to handle this problem.

My solution was to serialize the specific data from an existing database and store it as a JSON file. Then in each unit test that needed that data I deserialized the JSON file into classes and use EF Core to save it to the unit test’s database. And because I was copying from a production database which could have personal data in it I added a feature that can anonymize personal data so that no privacy laws, such as GDPR, were breached.

Rather than writing something specific for my client I decided to generalise this feature and add it to my open-source library EfCore.TestSupport. That way I, and you, can use this library to help you with create better test data for unit/performance tests, and my client gets a more comprehensive library at no extra cost.

Setting the scene – why do I need better unit test data?

I spend a lot of time working on database access code (I wrote the book “Entity Framework Core in Action”) and I often have to work with large sets of data (one client’s example database was 1Tbyte in size!). If you use a database in a test, then the database must be in a known state before you start you test. In my experience what data the unit test’s needs break down into three cases:

Item 1, empty database, is easy to arrange: either delete/create a new database (slow) or build a wipe method to “clean” an existing database (faster). For item 2, few tables/rows, I usually write code to set up the database with the data I need – these are often extension methods with names like SeedDatabaseFourBooks or CreateDummyOrder. But when it comes to item 3, which needs complex data, it can be hard work to write and a pain to keep up to date when the database schema or data changes.

I have tried several approaches in the past (real database and run test in a transaction, database snapshots, seed from Excel file, or just write tests to handle unknown data setup). But EF Core’s excellent approach to saving classes with relationships to a database allows me to produce a better system.

Personally, I have found having data that looks real makes a difference when I am testing at every level. Yes, I can test with the book entitled “Book1” with author “Author1”, but having a book named “Domain-Driven Design” with author “Eric Evans” is easier to spot errors in. Therefore, I work to produce “real looking” data when I am testing or demonstrating an application to a client.

One obvious limitation of the “Seed from Production” approach is you do need an existing database that contains data you can copy from! Therefore, this works well when you are updating or extending an existing application. However, I have also found this useful when building a new application as the development will (should!) soon produce pre-production data that you can use.

NOTE: Some people would say you shouldn’t be accessing a database as part of a unit test, as that is an integration test. I understand their view and in some business logic I do replace the database access layer with an interface (see this section in my article about business logic). However, I am focused on building things quickly and I find using a real database makes it easier/quicker to write tests (especially if you can use an in-memory database) which means my unit test also checks that my database relationships/constraints work too.

How my “seed from production” system works

When I generalised the “seed from production” system I listed what I needed.

My “Seed from Production” feature handles all these requirements by splitting the process into two parts: an extract part, which is done once, and the seed part, which runs before each test to setup the database. The steps are:

That might sound quite complicated but most of that is done for you by the library methods. The diagram below shows the parts of the two stages to make it clearer – the parts shown as orange are the parts you need to write while the parts in blue are provided by the library.

Show me the code!

This will all make more sense when you see the code, so in the next subsections I show you the various usage of the “Seed from Production” library. They are:

In all the examples I use my book app database which I used the book I wrote for Manning, “Entity Framework Core in Action”. The book app “sells” books and therefore the database contains books, with authors, reviews and possible price promotions – you can see this in the DataLayer/BookApp folder of my EfCore.TestSupport GitHub project.

NOTE: You can see a live version of the book app at http://efcoreinaction.com/

1. Extract without no anonymisation

I start with extracting data from a database stage, which only needs to be run when the database schema or data has changed. To make it simple to run I make it a unit test, but I define that test in such a way that it only runs in debug mode (that stops it being run when you run all the tests).

As I said before you might need to anonymise names, emails, addresses etc. that were in your production database. The DataResetter has a simple, but powerful system that allows you to define a series of properties/classes that need anonymising.

You define a class and a property in that class to anonymise and the DataResetter will traverse the whole sequence of relationships and will reset every instance of the class+property. As you will see you can define lots of classes/properties to be anonymised.

The default anonymisation method uses GUIDs as strings, so the name “Eric Evans” would be replaced with something like “2c7211292f2341068305309ff6783764”. That’s fine but it’s not that friendly if you want to do a demo or testing in general. That is why I provide a way to replace the default anonymisation method, which I show in the example (but you don’t have to if GUID strings are OK for you).

The code below is an example of what you can do by using an external library to provide random names and places. In this implementation I use the DotNetRandomNameGenerator NuGet package and create a few different formats you can call for, such as FirstName, LastName, FullName etc.

NOTE: See the Seed from Production Anonymization documentation link on the AnonymiserFunc and its features. There are several pieces of information I have not described here.

The code below shows an extract method, which is very similar to the first version, but with some extra code to a) link in the MyAnonymiser, and b) defines the class+property that needs to be anonymised.

All the rest of the method is the same.

NOTE: The ResetKeysEntityAndRelationships method follows all the navigational links so every instance of the given class+property that is linked to the root class will be reset. It also uses Reflection, so it can anonymise properties which have private setters.

3. Seed a unit test database from the JSON file

Now I show you a typical unit test where I seed the database from the data stored in the JSON file. In this case using a Sqlite in-memory, which is very fast to setup and run (see my article “Using in-memory databases for unit testing EF Core applications” for when and how you can use this type of database for unit testing).

If you have read any of my other articles you will know I am a great fan of DDD-styled entity classes (see my article “Creating Domain-Driven Design entity classes with Entity Framework Core” for more about this). So, of course, I wanted the Seed from Production feature to work with DDD-styled classes, which it does now, but you do need to be careful so here are some notes about things.

NOTE: The symptoms of Newtonsoft.Json failing to serialize because it can’t access a property aren’t that obvious. In one case Newtonsoft.Json threw an unexplained “Self referencing loop detected” exception. And when I changed the JsonSerializerSettings to ignore self-referencing loops it incorrectly serialized the data by adding a duplicate (!). You can see the gory details in the issue I raised on Newtonsoft.Json.

Aside – how does this seeding work?

NOTE: This is an optional section – I thought you might like to learn something about EF Core and how it handles classes with relationships (known as “navigational links” in EF Core).

You may be wondering how this seeding feature works – basically it relies on some magic that EF Core performs.

These two things mean that the database is updated with the correct data and foreign keys, even if the relationships are complex. This is feature makes EF Core so nice to work with not just in this feature but for any adding or updating of linked classes.

Here is a simple example taking from one of my talks with the code and two diagrams showing you the before and after. In this case I create a new book, with a new many-to-many BookAuthor to an existing Author.

After that the classes look like this: note red classed are new, while blue have been read from the database (i.e. are tracked by EF Core).

Then we save this to the database with the following code.

After that the classes would look like this, with all the primary and foreign keys filled in and all navigational links set up.

EF Core has done the following to make this work:

This makes handling linked classes so simple in EF Core.

As I said earlier I had tried over the years different ways to set up complex databases, both with ADO.NET and EF6.x. EF Core has a number of features (good access to the database schema and better handling of adding linked classes to a database) which now make this much easier to implement a generic solution to this problem.

For my client the “Seed from Production” feature works really well. Their database contains data that is hard to create manually, and a pain to keep up to date as the application grows. By copying a database set up by the existing application we captured the data to use in our unit tests and some performance tests too. Also, the test data becomes part of the test code and therefore covered by the standard source control system. Another bonus is it makes it simple to run any tests in a DevOps pipeline as the test databases as it can be created and seeded automatically, which saves use from having to have specific database available in the DevOps path.

You won’t need this feature much, as most unit tests should use very basic data, but for those complex systems where setting up the database is complicated then this library can save you (and me) lots of time. And with anonymisation stage happening before the json file is created you don’t have to worry about having personal data in your unit tests.