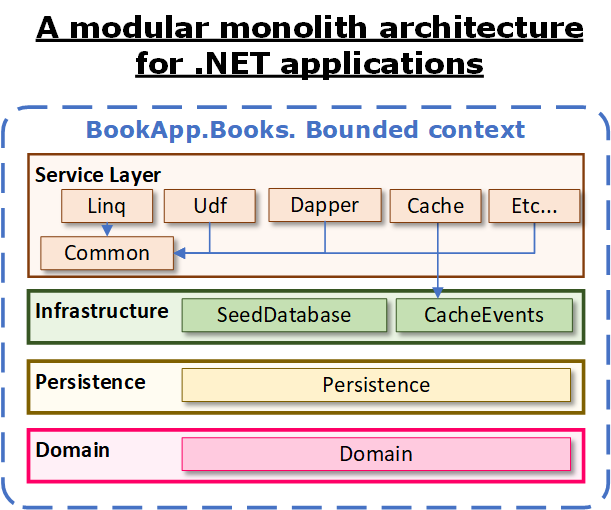 This is the first article in a series about building a .NET application using a modular monolith architecture. The aim of this architecture is to keep the simplicity of a monolith design while providing a better structure so that as your application grows it doesn’t turn into what is known as “a big ball of mud” (see the original article which describes a big ball of mud as “haphazardly structured, sprawling, sloppy, duct-tape-and-baling-wire, spaghetti-code jungle”).

NOTE: This article doesn’t compare a Monolith against a Microservice or Serverless architecture (read this article for a quick review of the three architectures). The general view is that a monolith architecture is the simplest to start with but can easily become “a ball of mud”. These articles are about improving the basic monolith design so that it keeps a good design for longer.

In Evolving Modular Monoliths series, the articles are:

NOTE: To support this series I create a demo ASP.NET Core e-commerce application that sells books using a modular monolith architecture. For this article the code in the https://github.com/JonPSmith/BookApp.All repo provides an example of the modularize bounded context design described in this article.

Who should read these articles?

These articles are aimed at all .NET software developers and software architects. It gives an overview of a modular monolith architecture approach, but later articles also look at team collaboration, and the nitty-gritty of checking, testing and deploying your modular monolith application.

I assume the reader is already a .NET software developer and is comfortable with writing C# code and understand .NET term, such as .NET projects (also known as assemblies), NuGet packages and so on.

What software principals do we need to avoid “a big ball of mud”?

You might be surprised by the number of layers I used, but they are there to help to apply the SoC principal.  Later on, I define some architectural rules, enforced by unit tests, that ensures that the code to implement a feature has is high cohesion and low dependency.

To help you to understand what all these layers are for let’s look at how the creation of an order for book in my BookApp application (you try this feature by downloading BookApp.All repo and running it on your computer):

Two general layering approaches that still apply when we move to a modular monolith architecture. They are:

The downsides of only using an n-layered architecture

So, rather than having all your code in an n-layered architecture we want to isolate the code for each feature. One way is to break up your application into specific business groups, and DDD provides an approach called bounded contexts (see this article by Martin Fowler for an overview of bounded contexts).

DDD’s bounded context work at the large scale in your business, for example in my BookApp as well as displaying books the user could also order books. From a DDD point of view the handling of books and handling of user’s orders are in different bounded contexts: BookApp.Books and BookApp.Orders – see the figure below.

Each layer is a .NET project/namespace and must have a unique name, and we want a naming convention that makes it easy for the developer to find the code they want to work on: the figure below shows the naming convention I that best described the application’s parts.

NOTE: I recommend Kamil Grzybek’s excellent series on the Modular Monolith. He uses the same approach as I have described in this section. Kamil’s articles give a more details on the architectural design behind this design while my series introduces some extra ways to modularize and share your code.

3. Modularize inside a bounded context

Modularizing at the bounded context level is done via the high-level business design of your application, while the modularization inside a bounded context is done by grouping all the code for a specific feature and give it its own .NET project(s). Taking an example from my Book App used in my book I created lots of different ways to query the database, so I had one .NET project for each query type in the ServiceLayer. These then linked down to the lower layers as shown in the figure below, although I don’t show all the references (for instance nearly every outer layer links to the Domain layer) as it would make the figure hard to understand.

These .NET projects/namespaces and must have a unique name so I extend the naming convention I showed in the previous bounded context modularization section by adding an extra name on the end of each .NET project/namespace name when needed, as shown below.

The rules for how the .NET projects in a modularized bounded context are pretty simple, but powerful:

NOTE: To ensure these are adhered to I wrote some unit test code that will check your application follows these three rules – see this unit test class in the BookApp.All repo.

The positive effects of using this modularization approach and its rules are:

Overall, this modularization approach stops the spaghetti-code jungle part of the “a big ball of mud” because now the relationships are managed by .NET and you can’t get around them easily. In the end, it’s up to the developer to apply the SoC and encapsulation software principals but following this modularization style will help you to write code that is easy to understand and easy to refactor.

Thinking about the downside – what happens with large applications?

I learnt a lot of things about building .NET application using my modular monolith modularization approach, but it was very small compared to the applications I work on for clients. So, I need to consider the downsides of building a large application to ensure this approach will scale, because a really big application could have 1,000 .NET projects.

An answer to these downsides – break the application into separate packages

While the 3 downsides could be handled through rules and good team communication a modular monolith doesn’t have the level of separation that separate solutions (i.e., like Microservice do), but how can we do this when we are dealing with a monolith? My answer is to move any of the larger or complex bounded contexts into its own solution, pack each solution into a NuGet package and then install these NuGet packages into the main application.

In part 2 I describe how you can turn a bounded context into separate solution and turn it into a NuGet package that can be installed in the main application, with special focus on the development cycle to make it only take a few seconds (not the few minutes that nuget.org takes) to create, upload, and install a NuGet package for local testing.

The question is: will the extra work needed to apply a modular monolith architecture to your application really create an application that is easier to extend over time? My first use of a modular monolith architecture was while writing the Book, “Entity Framework Core in Action” and it was very positive. Overall, I think it made me slightly faster than using an n-layered architecture because it was easier to find things. But the real benefit was when I added features for performance tuning and added CQRS architecture, which required a lot of refactoring and moving of code.

Since my first use of a modular monolith architecture, I have further refined my modular monolith design to handle large application development. In the second article I add a further level of separation for development team so that large parts of your application can be worked on in its own solution. As a software developer myself I ensured that the development process is quick and reliable, as it’s quite possible I will use this approach on a client’s application.

I am a little confused by this sentence: “I place as little as possible business code should be in the Front-end layer, but instead the Front-end calls services registered with the dependency injection system to display or input data.” I don’t know if there is an extra word or incorrect word. I think I understand what you are saying based on the rest of the test in the bullet point but would you please clarify that sentence?

Sorry. I meant “rest of the TEXT…”

Yes, that sentence is a bit broken. I have fixed it.

Interesting and timely article for me. I am currently looking at expanding a relatively small clean-layered app by adding many new features which will work largely in isolation so can use their own context. It seems this architecture is a natural progression to keep the code well organised.

Looking forward to reading the rest of the series!

Glad you found it interesting.

There are a few things you need to do handle the two DbContexts which I cover in chapter 9 my book “Entity Framework Core in Action“, but if you look at the this code in the ASP.NET Core Startup class you will get the idea.

Again a very interesting article – thank you for sharing your experiences!

A couple of questions and thoughts came into my mind during reading:

I’m happy to read your thoughts on this!