This article gives an “under the hood” view of what happens when EF Core reads in data from a database. I look at two types of database read: a normal query and a query that contains the AsNoTracking method in it. I also show how a bit of experimenting on my part solved a performance problem that one of my client’s had.

I do assume you know EF Core, but I start with a look at using EF Core to make sure we have the basics covered before I dive into the depths of EF Core. But this is a “deep dive” so be ready for lots of technical detail, hopefully described in a way you can understand.

This article is part of a “EF Core In depth” series. Here is the current list of articles in this series:

Other older articles in this series are

This “EF Core In depth” series is inspired by what I found while updating my book “Entity Framework Core in Action” to cover EF Core 5. I am also added a LOT of new content from my experiences of working with EF Core on client applications over the last 2½ years.

NOTE: There is a companion GitHub repo at https://github.com/JonPSmith/EfCoreinAction-SecondEdition. This has a simple e-commerce site called Book App that you can run. Also, there are unit tests that go with the content in this article – look for unit test class whose name start with “Ch01_”, “Ch02_” etc.

TIP: If you already know EF Core then you can skip this section – it’s just an example of how you read a database.

In my book I have created a small web application that sells books – think super-simple Amazon. In this introduction I am going to describe the database structure and then give you a simple example of writing to that database.

a. The classes/tables I’m going to work with

My Book App as I call it starts out in chapter 2 with the following five tables shown in the figure below. I chose this because a) the data/concepts are easy to understand because of sites like Amazon etc. and b) it has one of each of the basic relationships that can exist between tables.

Theses tables are mapped to classes with similar names, e.g. Book, BookAuthor, Author, with properties with the same name as the columns shown in the tables. I’m not going to show the classes because of space, but you can see these classes here in my GitHub repo.

b. A look at what you need to read this database via EF Core

The unit test code below comes from the EfCoreinAction-SecondEdition GitHub repo and shows a simple example of reading in a set of four Books, with their BookAuthor and Authors entity classes from an existing database.

The result of all of this is a set of books, with normal properties, like the Title of the Book, filled in and the navigational properties that link the entity classes, like the AuthorsLink property in the Book, filled in with a reference to the correct instance of the entity class it links to.  And the last few lines after the //VERIFY comment are some simple checks that there are four books have, between them, three distinct authors.

This example is known as a query, and one of the four types of database accesses, which are known as CRUD (Create, Read, Update, and Delete). I cover the Create and Update in the next article.

How EF Core represents data when reading from the database

When you query a database EF Core goes thought various steps to convert from data returned by the database into entity classes with navigational links filled in. In this section we will look at those steps for two types of queries – a normal query (i.e. without AsNoTracking, also known as a read-write query) and a query with the AsNoTracking method added (known as a read-only query).

But first we look at the initial part which takes your LINQ command, converts it to the relevant commands for the database type you are using, and gets the data back. This is common to the two types of query we are going to look at. See the following figure for this first part.

There is some very complex code that converts your LINQ into database commands, but there really isn’t a lot to say other than if your LINQ can’t be translated you will get an exception from EF Core with a message that contains ‘could not be translated’. Also, when the data is coming back features like Value Converters may adapt the data.

NOTE: In chapter 6 of my book I cover some of the more complex LINQ commands and what you should do to help EF Core to translate to database commands.

This section has shown the first part of the query, where your LINQ is turned into database commands and returns all the correct values. Now we look at the second part of the query where EF Core takes the returned values and turns them into instances of the entity classes and filling in any navigational properties. There are two types of queries which we will look at.

A normal query reads in the data in such a way that the data can be edited, which is why I refer to it as a read-write query. It doesn’t automatically update data (See next article for how to write to the database), but unless your query read-write then you won’t be about to update the data you have just read in.

The example I gave you in the introduction does a normal query that reads in the four example books with the links to their authors. Here is the query code part of that example

An AsNoTracking query is a read-only query. That means anything you read in won’t be looked at when the SaveChanges method is called. The AsNoTracking option is there because it makes the query perform better. I cover this and other differences from a normal query in the next section.

The LINQ query goes through the two of the three steps shown in the normal query figure above. The step that is left out is the 3. Tracking snapshot, and the relational fixup step is slightly different. The following figures shows the steps for an AsNoTracking query.

EF Core 5 added a new method called AsNoTrackingWithIdentityResolution. This makes the returned data not tracked, but it does do Identity Resolution.

I worked for a company where a lot of their dat was hierarchical, that is data that has a series of linked entity classes with an indeterminate depth. The problem was I had to parse the whole hierarchy before I could display it. I initially did this by eager loading the first two levels and then used explicit loading for deeper level. It worked but the performance was very slow, and the database was overloaded with lots of single database accesses.

This got me thinking, if the normal query relational fixup is so clever could it help me improve the performance of the query? – and it could! Let me give you an example using an example of employees in a company. The figure below shows you a possible hierarchical structure of a company we want to load.

For instance, if I wanted to select all the people that work in Development (each Employee has a property with the name WhatTheyDo with a type Role which has the department(s) they work in) I could write this code.

This creates one query that loads all the employees who work in Development, and the relational fixup filled in the WorksFoMe navigational property (collection) and the Manager navigational property (single) on all the employees in the returned employees. This improves both the time the query takes and reduced the load on the database server by only sending one query (compared with my original query that used explicit loading).

You have seen two types of queries, which I called a) a normal, read-write query, and b) an AsNoTracking, read-only query. For each query type I showed you what EF Core does “under the hood” and the structure of the data read in. And the differences in how they work shows their strengths and weaknesses.

The AsNoTracking query is the obvious solution for read-only queries, as its faster than the normal, read-write query. But you should keep in mind its limitations of the relational fixup, which can create multiple instances of classes where the database only has one relationship.

I hope you have found this article useful. You can find a must longer and detailed version of this in chapters 1 to 6 of my book Entity Framework in Action, section edition.

Respecting your help to community and thanks in advance…

Sorry that isn’t a simple answer, but your problem isn’t simple either.

Why do you say that? I know that the hierarchical data does need an Include (unless you are using some other way, such as lazy loading).

If you are checking the hierarchical data example in a unit test then watch out for EF Core’s Identity Resolution as that can make it look like it auto-loaded the navigational properties.

Just took a look on unit tests. And if you remove .Include(x => x.WorksForMe) from TestLoadWorksForMeTracked unit test, the relational fixup will work out what is linked to what. Probably this works because of self referencing 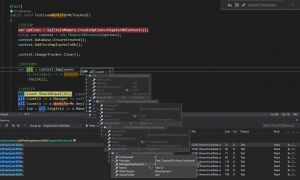 Ah, I see what you are getting at. Yes, if you use a tracking query it nearly gets it right because of identity resolution, but it doesn’t get everything right as the check that the WorksForMe fails because the deepest employees’ WorksForMe is null.

Hi Jon,
Yes, it fails because the deepest employee does not have WorksForMe at all. When “Include” is used, a collection is created for both cases: when children is found and not found (empty collection will be). This is just difference, which I found. The result will be the same for non-tracking queries when AsNoTrackingWithIdentityResolution method is used.

Thanks for all your posts. They are awesome

Much of the problems using Entity Framework occurs because developers don’t known how to it works “under the hood”.With that, they use it wrong. This post helps the process of understanding EF Core a lot.

Thanks Bruno. Glad you liked it.