Last Updated: July 31, 2020 | Created: July 17, 2014
Quick Summary
This post is an appendix to an article I am writing for the Simple-Talk blog site. It contains the detailed results of side-by-side comparisons of sync and async versions of the  Entity Framework (EF) 6 data accesses. This shows that async EF commands are not that much  slower than normal sync commands.

I am writing a article called ‘The .NET 4.5 async/await Commands in Promise and Practice‘ for the Simple-Talk blog. In this I look at the whole area of the async/await commands for tasking.

In putting this article together I ran extensive side-by-side comparisons of normal, synchronous Entity Framework (EF) commands and the new async versions of the same commands. I found some surprising results which I think others might be interested in.

The Simple-Talk article wasn’t the right place to put all this technical detail so I have written this blog as an appendix for those of you that would like to drill-down into the detail. I think you will find the results interesting.

Overview of the test database

I am building a .NET library called GenericServices (see previous blog post on this) and as the test database I have a simple blog site with three classes in it: Blog, Post and Tag. The diagram below shows the data classes and their relationships.

Most of the tests are done on the Post class, which is the more complex to update and deleting it does not cause cascade deletes. Also, for update I assume a disconnected update, i.e. as would happen on a web site, where the original Post is read and then specific properties are updated before they are written back to the database.

The first test results I will share with you is the raw speed of the sync and async version of the EF commands. This was done inside an NUnit test running  inside Visual Studio 2013 on my development PC which has an Intel i7 processor clocked at 3.31GHz. The database is localDb running SQL server 2012. I ran 1000 tests on a database filled with 1000 entres and averaged out the time for each command.

You can see the unit test code here (I used method Perf21NCompareEfSyncAndAsync1000Ok around line 61) and the actual Ef commands here (note: GenericServices is an open-source project).

Let me list the results first and then draw some conclusions from this.

Raw figures like that are interesting, but its real-world performance that matters. I have a companion MVC5 web site called SampleMvcWebApp, also open-source, which I try things out on. This has the same Blog, Post, Tag format described at the start, but with only a few entries (default 17). I have this MVC web app on different hosting environments, plus internally:

Try this yourself!
The SampleMvcWebApp MVC5 web site is live and available for you to access and play with. Its address is http://samplemvcwebapp.net/

My tests are done using ab, the Apache HTTP server benchmarking tool. This allows me to load the site and also get averaged performance figures. I used the benchmark tool to read the posts list (17 entries) in two modes: a) one user trying 100 times, b) 50 users trying twice, all at the same time. The results are:

Notes:
– The Sync (ms) and Async (ms) columns are the average total time to get one list result from the web site using a synchronous and async EF method respectively.
– The SD (ms) column holds the standard deviation and shows the amount of variability of the results. 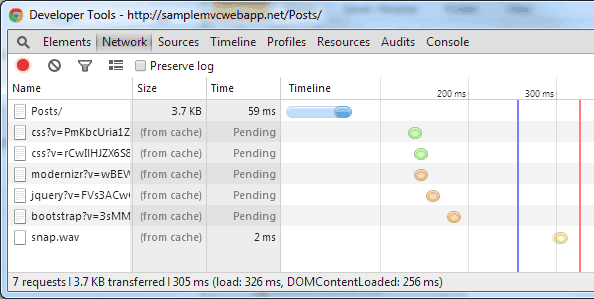 This clearly shows what I said in the Simple-Talk article – that optimising/caching the other files, like css and JavsScript files would have far more effect than worrying about whether to use a sync or async data request.

I will end this section by saying it is quite difficult to test scalability on live web sites because they are designed to take a lot of load. You might like to look at Steven Sanderson’s video about threads and scalability which has an excellent demo http://channel9.msdn.com/Events/TechDays/Techdays-2012-the-Netherlands/2287.

EF async data accesses have only a small overhead over the standard, sync commands. That is big news, and contrary to some of the older documentation that is out there. So feel free to use async EF commands in your next application.