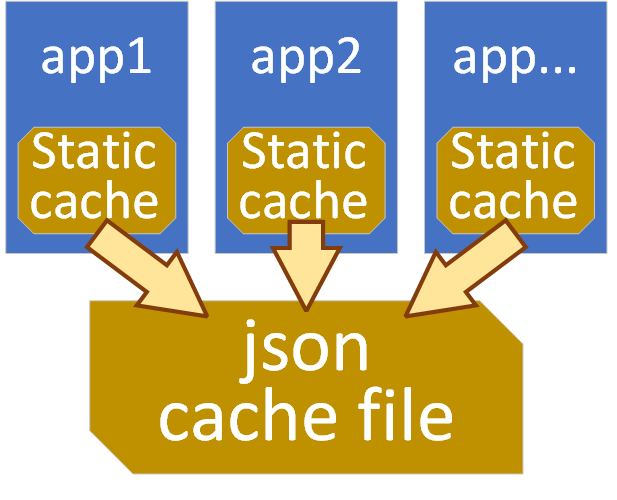 The other positive of the FileStore cache is its very easy to setup and use. The FileStore cache design is based on ASP.NET Core’s appsetting.json files so it stores the cache entries in a json file which is shared by all the instances of the application. This also means you don’t have to set up, or pay, for a database for your caching 😊.

Read on to understand how the FileStore cache works so you can decide if it would be useful to your application.

Setting the scene – why and how I built the FileStore cache library.

The articles / documentation about a software cache talk about improving performance and scalability. For instance, in my book “Entity Framework Core in Action” I use two different cache approaches to improve performance of displaying and searching first 100,000 books and then ½ million books (see this article for the details and link to a video).

But recently I used the ASP.NET Core’s appsetting.json file as a simple distributed cache when adding sharding to the multi-tenant part of the AuthPermissions.AspNetCore library. In this case I configured a separate json file containing the list of database information used ASP.NET Core’s IOptionsSnapshot service to read it. This means I can update the json file and then get the latest data when I use IOptionsSnapshot – and IOptionsSnapshot is very quick, which is good as that data is accessed every HTTP request.

IOptionsSnapshot is great, but it turns out there are some issues to fix if its going to properly implement a distributed cache. For instance, if two instances update the json file at the same time, then there would be a problem. At best result would be that one instance throws an IOException, but the worse result is one of changes is lost and you aren’t aware of it. This breaks the “coherent (consistent) across requests to multiple servers” rule of a distributed cache.

The diagram below shows the four steps that happens when the FileStore cache goes through an update (e.g, Set or Remove).

NOTE: Even if you have only one application instance to the four steps are still run as a single application can be running multiple processed at the same time.

The end result is that the Net.DistributedFileStoreCache library is an cache that meets the requirements of a distributed cache. It also contains some extra useful features over the default IDistributedCache interface (described later).

The primary .NET interface for distributed caches is IDistributedCache which has only four methods types: Set, Get, Remove and Refresh, plus async versions of each, with the key being a string and the value is a byte[]. For instance, the sync Get method has the following signature:

But because I am storing the data in a json file its much better to have the value of type string, called DistributedFileStoreCacheString, which contains the primary code. But to make the library useful to users already using the IDistributedCache I added other versions where the value is byte[]. Also, I added class that added a few extra features to the primary …String version. The figure below gives you a summary of the four interfaces the FileStore cache library provides.

The table below shows the which interface is registered is defined by the WhichVersion parameter in the FileStore’s options – they are:

the AddDistributedFileStoreCache extension within FileStore cache library allows to register the FileStore cache version you want to use as a service. It also sets up / find the FileStore cache file name and location using your environment information, which is simpler (and cheaper) compared to using a distributed cache that uses a database. The code below shows how you would this in an ASP.NET Core’s Program startup.

The registration code above would register a service with the interface IDistributedFileStoreCacheString. It also uses the ASP.NET Core environment class to create an different cache filename based on your EnvironmentName, for instance the file name would be “FileStoreCacheFile.Development.json” when in a development environment, and file is stored directory defined by the environment’s ContentRootPath FilePath. This makes sure that your cache file is in the right place and your development c and doesn’t interfere with your production cache file.

NOTE: Go to the Register the FileStore Cache documentation for more information on the setup and the various options you might need.

The performance of the distributed FileStore Cache

I measure the performance of the FileStore cache String version by the excellent BenchmarkDotNet library. My performance tests both reads and writes of the cache on a cache that already has 100, 1,000 and 10,000 cached values in it. The performance tests where run on an Intel Core i9-9940X CPU 3.30GHz.

The full performance figures are available in the repo’s README file but here is a summary.

The time taken to add a cache value to cache goes up as the size of the cache is – see table below. This makes sense as unlike a database you are reading and then writing ALL the cache values into a file. The async versions are slower than the sync versions, but it does release a thread while reading and writing.

NOTE: If you want to make sure your use of the FileStore cache is the best it can be, then I recommend you read the Tips on making your cache fast document.

The biggest difference if you use the String version is that the value is a string instead of byte[]. But each FileStore version has some other differences, as detailed below:

The code below uses the String version and shows the use of the GetAllKeyValues (see line 12) and the Set method (line 30).

Looking at the IDistributedFileStoreCacheClass version

The reason for building the FileStore cache library was to improve my AuthPermissions.AspNetCore library and its handling of multi-tenant applications. In this library I have some data in the appsettings.json files which would be better in a distributed cache, but they have multiple parameters.

I saw this article which suggested some extension methods to turn a class into a json string before saving that json string in a cache, and I though that would be really useful for me. Rather than creating extension methods I built a small class called DistributedFileStoreCacheClass that inherits the string FileStore cache version that adds the following method types (the first threehave an async version):

NOTE: The <T> part has the following where cause: where T : class, new()

NOTE: Be aware that the cache does not hold the class type in the cache. It is up to you to use the same <T> on the GetClass as you used in the SetClass method.

Here is an example from my unit tests to show how it works:

The string below shows how your class is turned into a string to save in the cache.

The byte[] value versions of the distributed FileStore cache

I needed a distributed cache that has a very fast read because wanted to read a lots of cache values on every HTTP request. If I used a database-based distributed cache could have taken at least a millisecond and more, but I remembered how fast the ASP.NET Core IOptionsSnapshot<T> was when it returns data in the appsettings.json file.

After quite bit of work, I found I couldn’t build a distributed cache using ASP.NET Core’s IOptionsSnapshot<T>. But it did guide me to a design that that a) implements a true distributed cache, b) which is blistering fast on reads, and c) is very easy to setup. From my point of view the slower update of the cache (e.g. Set, Remove) is a pity, but in my situation adding a new cache value happens very infrequently.

In the end I put in extra features, like the byte[] values version, because there must be users already using the IDistributedCache interface. To my mind the FileStore cache’s simple setup and no extra costs (for Redis, SQL Server, etc.) may be more attractive than its super-fast read! Good luck and do let me know how you get on with this library if you use it.

Hi John,
But, where are located the data in the cache system? In memory? The “FileStore” subsystem is a metafile located in memory or in disk? Because if i want to use it outside cloud i don’t want to get poor performance if the file system is raising high levels.

I replied myself. Is a shared file..so first i have to add a network protocol over the servers to work. Really i cannot see the good performance if i have to push message over a network share file like SMB/NETBIOS.

“NOTE: The shared resource is a json file and for it to work as a distributed cache all the application’s instances must be able to access that file. This would work with Azure’s Scale-Out feature with its default setup.”

Yes, this distributed cache relies on a shared file to work, and a static cache in each instance of your application which is updated if the shared file changes. This gives a very fast read, but a slow write and I go to some length to point out the pros and cons at the beginning.

As to your use of SMB/NETBIOS

I hope that helps.

DistributedFileStoreCacheException: Your cache json file has more that 10000 bytes, so you MUST set the option’s MaxBytesInJsonCacheFile to a bigger value.

If you are getting that exception, then you have increase the internal buffer file. Have a look at the following documentation.

I translated your questions and it says:

All the application’s instances MUST be able to access json FileStore cache file. If you are using the default settings of Azure’s Scale-out will do that.

But if you can set the PathToCacheFileDirectory option to a directory that all the applications can access, then it can work.

Your question shows I didn’t define this and I have updated this article, and the FileStore cache documentation – see the “Registering FileStore Cache where the applications are run on different servers” section of the docs for more.

3
Reply
wpDiscuz
We use cookies to ensure that we give you the best experience on our website and monitoring traffic. If you continue to use this site we will assume that you are happy with it.Ok